How much would the USS Enterprise cost to run?

With the release of the latest Star Trek film, Star Trek Beyond, we thought we’d take a look at how much it would cost to keep the mighty USS Enterprise in service, to boldly go where no one has gone before…

Specifically, we’ve worked out the annual maintenance costs for Captain James T. Kirk and it turns out he needs deep pockets and an extremely large chequebook to explore the final frontier.

We’ve calculated that it would cost over £10.3m* for the USS Enterprise to go on a year’s mission, however we’re unsure how much this figure is in Federation Credits. The figure is for a normal year and doesn’t take into account the ship travelling through more dangerous quadrants of the galaxy where the crew are likely to encounter hostilities with Klingons and Romulans. Naturally we would expect the cost to spike in these areas of space, as Kirk’s maverick approach to skippering usually means hostilities are not uncommon, with the ship sustaining significant damage.

The Ship and its costs

There have been several incarnations for the Enterprise, but for the purposes of this we’ve focused on the latest edition first seen in Star Trek Into The Darkness, which Star Trek wiki refers to as the USS Enterprise (NCC-1701) 23rd century Federation Constitution-class starship (Alternate Reality). The ship is by any standards absolutely giant! It measures just over 725 metres in length and 190 metres in height. So unsurprisingly because of its size it would cost a lot just to keep it in service every year - £5.2m being a lot in this case. A big ship needs a big crew and that's what the Enterprise has; 430-strong to be precise. The salaries of the engineers in this crew would then total up to £4.1m. The expenses don't stop there though, there's still £946,825 to add in safety and performance upgrades every year.

As we do not have the technology from the Star Trek films, we needed to use the nearest modern day equivalents to work out the costs. To do this we turned to official data from NASA, The Federation of American Scientists, the US Naval Institute and the United States Navy. 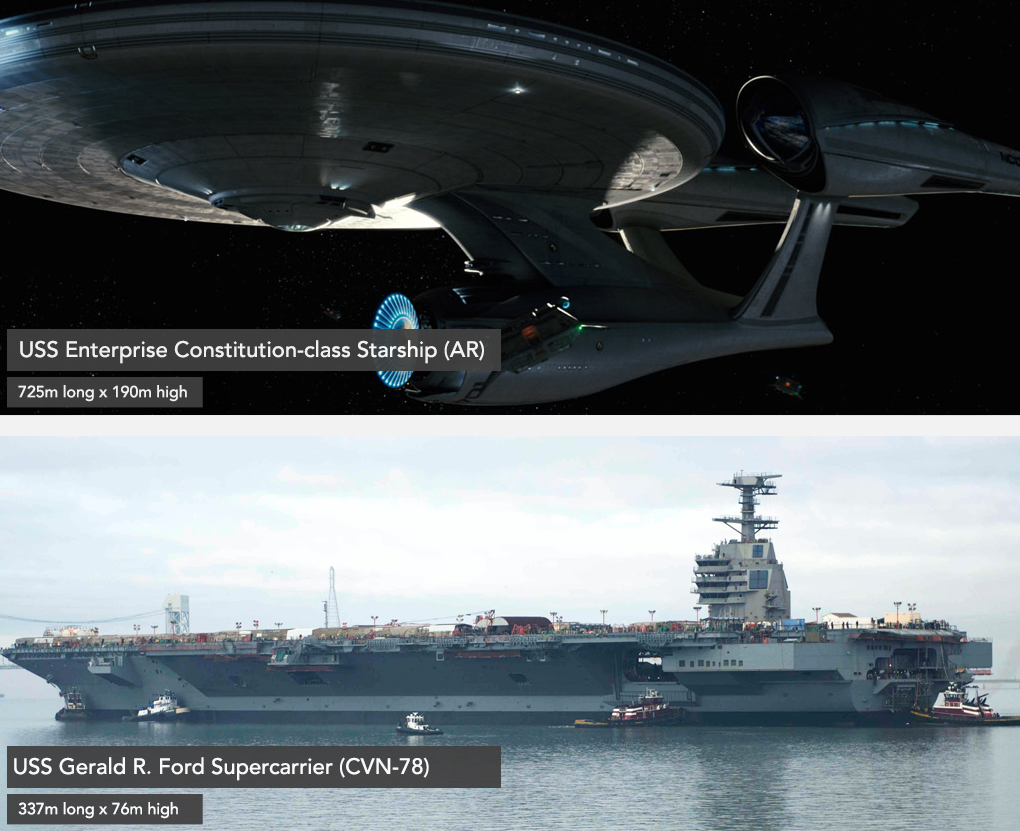 The Enterprise is by general definition a large explorer ship with weaponry and an internal hanger, (yes, Trekkies we know it’s a Constellation Class Starship really) so the closest modern day resemblance is the USA’s super aircraft carrier, USS Gerald R. Ford. The Gerald R. Ford is currently the largest and most advanced ship military ship in the world – despite this it’s still roughly half the size of the Enterprise – and houses a hanger and advanced weaponry. Doubling the annual maintenance cost for the USS Gerald R Ford to reflect the Enterprise’s size, we arrived at the figure of £5,259,402.94.

Using the same percentage of engineers to crew needed to run the Gerald R. Ford and their average salary we can assume that the annual labour costs of keeping Captain Kirk boldly going would be £4,136,589.44*.

We then took into account the yearly cost of safety and performance upgrades of the space shuttle from NASA, a ship capable of carrying people to and from space, was £946,824.98*, multiplying all the figures together gave the total cost per annum as £10,342,817.36.

USS Enterprise vs the Millennium Falcon