Which Supercars Use Gas Struts?

While there’s the more obvious benefits, like being able to enjoy amazing performance and incredible speed, little features are what really put supercars on their much-deserved pedestals. This is where the humble gas strut really comes into its own. Even the rarest of supercars use these clever little devices to provide their passengers with added convenience – sometimes in creative ways that owners don’t even realise!

Here, SGS takes a look at just a few examples of gas strut use within some of the world’s most lavish vehicles.

Thanks to the smooth and controlled opening mechanism that gas struts can provide, a number of supercars utilise them to offer more convenient door access, often in quite unique ways.

Swedish manufacturer Koenigsegg rank among the world’s top supercar makers, boasting some incredible motors in their range. Only six of their CC8S sports cars were made, and these incredibly rare cars featured lightweight carbon fibre doors that opened upwards to a 90 degree angle. The doors could be opened by simply unlocking and pushing/lifting them, after which they’d gently raise and come to a controlled stop, all thanks to their gas struts.

Often referred to as the McLaren 12C, the blistering pace and gorgeous body you get might be one of this supercar’s biggest draws, but owners can also enjoy dihedral (or butterfly) doors as well. These doors lift up and move outwards at an angle through the ingenious use of gas struts; almost as if this already majestic car has an equally majestic pair of wings.

This more recent and innovative supercar from BMW is perhaps best-known for being a pioneering plug-in hybrid, which still delivers powerful performance. What you might not know about the i8 though is that it comes with smart scissor-opening doors (similar to the aforementioned butterfly doors). Which as you might have guessed, are efficiently lifted by powerful gas struts.

You might not necessarily associate supercars with storage, but many still come with the boot space and interior stowage you’d expect to find in an average road car. This is made all the more useful because of gas struts.

Another classic when it comes to supercar brands, the Lamborghini Gallardo coupe is a particularly sought-after model. Sleek, fast and brimming with luxury extras it’s certainly worth the money you pay for it. One such luxury is the gentle and controlled lifting boot lid which comes from two attached gas struts; it even works well with a weighty spoiler fitted!

In the engine bay of this luxury Mercedes-Benz you can find gas struts being used to support its substantial, eight-cylinder beast of an engine. They help keep it balanced and stop it from shifting around and coming into contact with the supercar’s body.  Subsequently this aids performance by keeping the vehicle gripped to the road, especially when cornering quickly.

In the engine bay of this luxury Mercedes-Benz you can find gas struts being used to support its substantial, eight-cylinder beast of an engine. They help keep it balanced and stop it from shifting around and coming into contact with the supercar’s body. Subsequently this aids performance by keeping the vehicle gripped to the road, especially when cornering quickly. 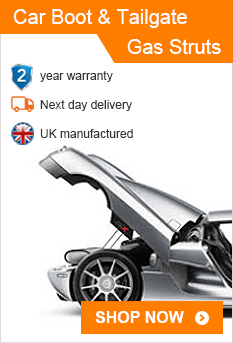 So there you have it, just a few examples of supercars using gas struts. There may only be a few in our list but the reality is that there are many more supercars that have them fitted too. Equally, your average road car is more than likely to use them in one way or another; such is the versatility of these dynamic pieces of equipment.

Supercar owner or not, you may need to replace your car’s gas struts at some point to ensure you don’t miss out on the luxuries they afford you. Fortunately, we are experts when it comes to them and if you need any guidance, don’t hesitate to get in touch and SGS will be happy to help.